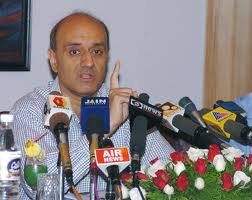 Mr. Parvez Dewan, IAS, will take over from Rajen Habib (R H) Khwaja as Secretary - Tourism, Government of India. A 1977-batch IAS of Jammu & Kashmir (J&K) cadre, Dewan will assume office from first week of October 2012 in the Ministry of Tourism. Parvez Dewan has been Secretary in Ministry of Overseas Indian Affairs before this. In his more than three decades of service, he has handled various res

ponsibilities, including in the Department of Tourism in both home cadre, J&K, as well as in the Centre cadre. He was Secretary - Tourism, J&K from 1992 to 1994 and Commissioner-cum-Secretary of J&K between 1998 and 2001. He was also the Chairman and Managing Director, India Tourism Development Corporation (ITDC), a public sector under the Ministry of Tourism, Government of India between 2006 and 2009. He was instrumental in preparing the groundwork for Commonwealth Games as Chairman and Managing Director of ITDC.
Posted by Unknown at 00:54